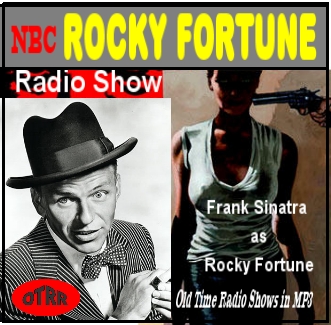 Created in 1953 by writer George Lefferts and starring Frank Sinatra in the lead, Rocky Fortune followed the exploits of a marginally employed jack-of-all-trades Rocko Fortunato, or Rocky Fortune. Considered a second-rate show even when it aired, the series found Sinatra at the nadir of popularity after his 1940s crooning heights and just before his career was rekindled with his role in From Here to Eternity.

The scripts, mostly by George Lefferts and Ernest Kinoy, often stretched the limits of believability, taking Fortune from jobs as a social director at a Catskills resort to transporting a truck of nitroglycerine across the country. Sinatra's cool, somewhat flippant persona brought the audience along for a fun ride and made it easier to overlook sometimes absurd situations.

There was little continuity over the series' run. Despite not being able to keep a job for more than a single episode, Fortune always had the license, certification, or union card necessary for the next job. The only other recurring character was the dim-witted police Sergeant Hamilton J. Finger, played by Barney Phillips, who always called his precinct headquarters "the Irish clubhouse". For reasons never fully explained, Fortune always had a direct line to the Sergeant and at times even barked orders to the beat cops under Finger's supervision.

NBC never found a sponsor for the show but the writers frequently found a way to work the title of Sinatra's new movie, From Here to Eternity, into the story. Rocky Fortune aired 25 times over 26 weeks on NBC October 6, 1953 to March 30, 1954. All the episodes are available in nice sound and represent a real treat for fans of Frank Sinatra. OTRR Release Information:


From the Old Time Radio Researchers Group (OTRR). See "Notes" Section below for more information on the OTRR.

Reviewer: Ryncewynd - favoritefavoritefavoritefavorite - June 3, 2008
Subject: Surprising Fun
sinatra as a radio detective was a surprise, having listened to the episodes all day I grew to like the characters even more - although the recordings weren't perfect, I have heard a lot worse - definately worthwhile listening to on a lazy day.
Reviewer: XMinusOne - favoritefavoritefavorite - July 26, 2007
Subject: Not the greatest OTR show, but fun
As said before, this is not one of the great OTR series. The writing is relatively good, and the concept of Rocky Fortune (Mr. Sinatra) changing jobs each episode adds to the variety of the show. The acting (script reading?) is relatively run of the mill, but consistent with other broadcasts Mr. Sinatra was on; not great, but definitely more than than journeyman work. One of the interesting and, to me, better features of the show is that Mr. Sinatra gets to act; not sing. It adds a degree of credibiltiy to the character, Rocky Fortune, Mr. Sinatra portrays.
Reviewer: Styxion - favoritefavoritefavoritefavoritefavorite - July 21, 2007
Subject: All In Good Fun
Good ol' fashion fun. As long as you don't go into it with any ideas of award-winning writing, this is a great way to spend a rainy day. Sinatra's charm keeps you laughing, even if the plot is completely unbelievable. Take it for what it is and enjoy.
Reviewer: OTRDUDE - favoritefavoritefavorite - June 1, 2007
Subject: Good show, sound quality not the greatest
While this may not be the most memorable old time radio series, it is great (especially if you're a Sinatra fan like I am) to hear Frank Sinatra in a non musical setting. I'm only giving this 3 stars, because the sound quality of the shows isn't the best. On some of the shows, there's an irritating hum in the background. Other than that, if you're a Sinatra fan, and have never heard these shows before, they're worth downloading and giving a listen to.